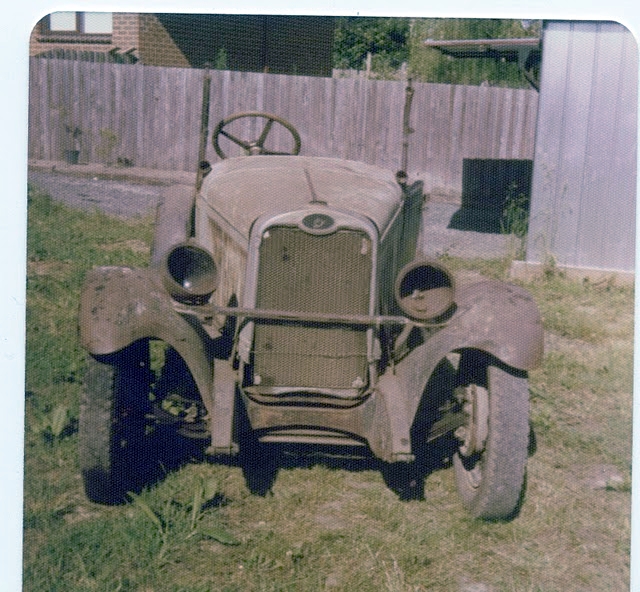 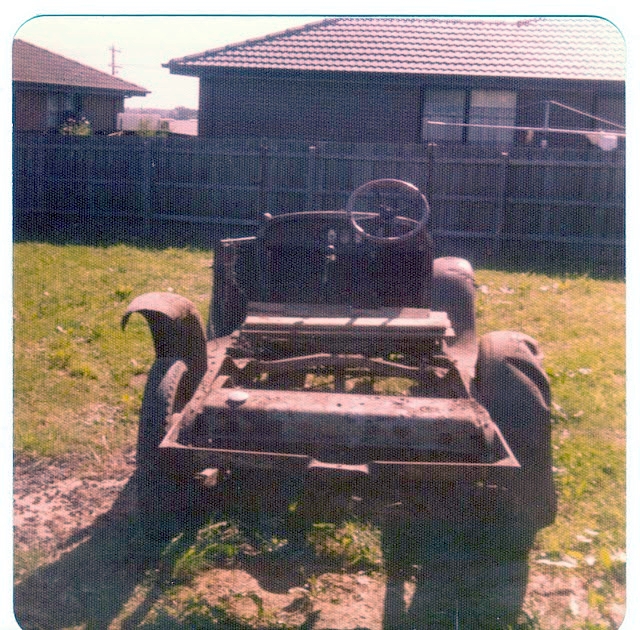 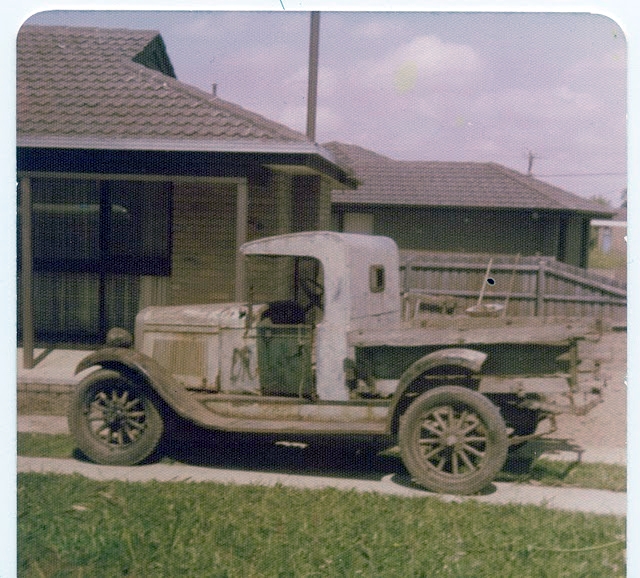 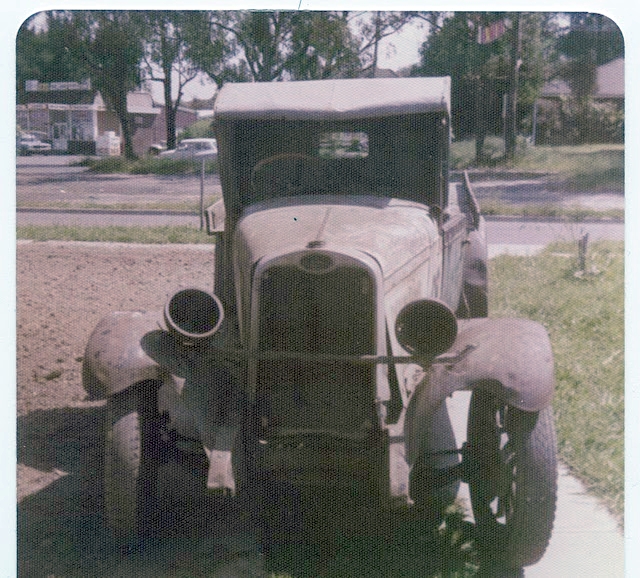 As a young man I knew I had the car bug and was spending way too much time cleaning, detailing and polishing a modern car. So in 1973 at the age of 20, just married, and moved into our first house some several weeks before, and with a list of jobs that would choke a gorilla, I decided I wanted to buy an A model Ford to hot rod, mainly because I liked the idea of the gravity feed fuel tank. Not seeing many around, I changed my preference to a 35 or 36 Chev Sloper, once again to be hot rodded. Again no luck, not many around, especially at my budget of a couple of hundred dollars. And then I settled on Chev as the make, what ever year or model I could come across for a good price. Came across what I thought was a 27 car chopped into a farm Ute, very sad, very worn out, and amazingly still running, no oil, no water, no brakes, etc etc etc, but in my eyes it was the car for me, at $245.
Picked up this thing from Bunyip (country Victoria), in a tandem trailer behind a 2 speed early Toyota Corolla, that's right a Corolla. How we (my brother in law Colin Bright and I) made it home with a load probably twice the weight of the car, I'll never know. But we did, except for coming down the Berwick hill and the thing starts fish tailing. Not wanting to be on the 6 o'clock news the only thing to do was flatten it, or as fast as you can in a 2 speed Corolla, and try and pull out of it, which we did. THE THINGS YOU DO AT 20.

Anyway got the wreck home to the dismay and anger of my new wife who thought we were putting in a front lawn that weekend. After assuring her that I would put it away until the garden was established, I started stripping the wreck the next day.What a shock, the cabin literally fell off, the front guards were held on by wire and the radiator wobbled from side to side like the pendulum on a grandfather clock.

The following day when I was unloading a trailer load of spares that also came with the car, this guy came up the drive as he had seen the wreck and started chatting. Les Francis was his name, and turned out to be a great friend and source of moral support over many years, including driving in convoy on the first day my Chev was on the road, registered. Without many nights at Les's place around the pot belly stove, I am sure the Chev would not have hit the road for a few more years.  I lost contact with Les for about 15 years as my family grew up and work commitments took over, but I am pleased to say after a chance meeting at the VDC Yarra Glen swap meet in 2010, we have latched on to each other again.

Getting back to the car, 2 weeks after unloading the wreck from the trailer, there is no front lawn, but car is stripped to bare chassis for sand blasting, and came back a Swiss cheese, and was scrapped. Took another 2 attempts to get a reasonable one to rebuild on. The main problem areas were the driver's side rail directly in line with the muffler and stubby exhaust. One thing leads to another, managed to get the lawn in and after a month or so have a restored rolling chassis, with retempered springs, new bushes and replacement spring hangers as the original were elongated to about twice their size.

The next step was to fit the steering box so I could maneuver the rolling chassis around the workshop.
I fitted what I thought was a usable steering box that I had cleaned up and greased, only to discover the main shaft was sloppy and unserviceable. I stripped it down and went to my local bearing supplier and purchased new bushes. The guy on the counter made a comment that these would require pressing into the housing, which to me meant  either the vice or a dead blow hammer . I was soon to realize my mechanical short comings in this area, so one Sunday night arrived on my brother in law's doorstep, Max Holt who was a Tool Maker and asked if he could help me out. When  the completed job was returned, I was surprised at the amount of work Max had done to return the shaft to a usable condition. The shaft had been bent and required straightening and machining prior to refitting to the housing with the replacement bushes fitted and reamed.

The following week Les came across the remains of a 27 tourer in a creek bed in Avonsliegh, in the Dandenong ranges, which I got for nothing and towed home, this time behind a better choice of car, a late 60's Compact Fairlane. But not after another drama. My brother in law Colin Bright, who owned the Compact Fairlane, and I attempted to pull the wreck out of the creek, which failed and we very nearly got the Fairlane bogged in the ploughed paddock. Found a local farmer who pulled out the wreck and put it on the trailer for $10.

I had been talking to a dealer in Adelaide regarding a rear tub and other bits and pieces that I needed to rebuild the rear of the car. After no contact for several weeks he rang me Easter Eve to say he had a complete but un-restored 28 Tourer that the local Holden Dealer apprentices had been working on, and would let me have it for $800. Sounded like the deal I had been waiting for.

So Ray sets off late Easter Eve during a severe storm period and flash flooding and heads off to Adelaide, some 800 miles. Arrive mid morning, see the car, its for me, pay a deposit and arrange for him to deliver to Melbourne the following weekend for $50. Seemed a good deal. Set off back home, 10 miles later the alternator dies, probably the flood water, and being Good Friday, no option to repair, RACV did not carry alternators in those days, so it's a mad dash home on the battery and several others, making it all the way to Dadswell Bridge, near Stawell, still several hundred kilometres from home, when the law pulls me over doing 160 in a 100 kilometre zone. Told I would have to travel up from Melbourne to Horsham Court if I wanted to save my licence, which I did several weeks later, cost $100 fine plus $175 for lawyer, plus petrol plus a day off work, plus severe aggro from my wife.
RACV comes out from Ararat and gives me my fourth battery to get back into town, where a mechanic had been working privately in the back of a service station. Pleaded for assistance and he fitted a Ford alternator which got me home and lasted another several years.

Got the now expensive Chev a week later, and in a moment of reality, said to myself, "There is no way I can desecrate this by turning it int a hot rod, I am going to restore it to original specs."

I can tell the long winded restoration story at a later date, but the short story is

# Running gear from Bunyip car
# Gear box and diff from car in creek
# Body and chassis from Adelaide car.
Posted by Ray Dean at 12:41 AM 1 comment:

The purpose of this blog is to record and document the 38 year history of my 1928 Chevrolet. I will try to cover all areas including the acquisition, the restoration, driving it over the years, and where it is mechanically and body wise in 2011. I would like to thank my wife Jan for not only tolerating the whole process, the late nights, the unusual jobs that were done inside our new house, some with, some without her knowledge, but more importantly agreeing to keep working for at least another 2 years longer than originally planned to finance the final stages of the restoration. And to my children Ross and Melanie, who grew up with a father with this strange obsession and hobby that kept him in the garage for many hours on numerous nights. I am sure they were known as the kids of that guy in the street with the old car. I am pleased to say the obsession is just as strong as back in 1973, but the enjoyment is more in the pleasure from driving and maintaining, as opposed to the original restoration process. One of the biggest thrills was my daughter Melanie asking if the Chev could be the wedding car for her upcoming marriage to her fiance Justin. I will cover this in more detail later, but the car was transferred from being up on blocks not running for about 8 years, to undergoing a mini restoration in just 9 months, finished at 4 am the morning of the wedding.

I must also thank the person who inspired me to begin this task, Grant Fowler, from down Gippsland way. Grant had started a blog for his Chev "Monty", in memory of his late father. You can view Grant's Blog at  http://montythe1928chevrolet.blogspot.com/
This prompted me to document as much detail as I can while I can still remember.

Let's get on with the story 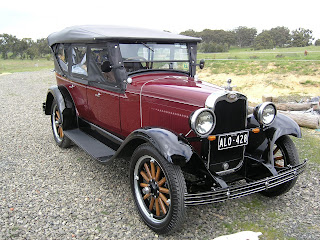