If you have been following Chris's makeover and repair of the rear wheels for his Chev, scroll down to "Update 10th October"

If your reading this for the first time, its a great read from top to bottom 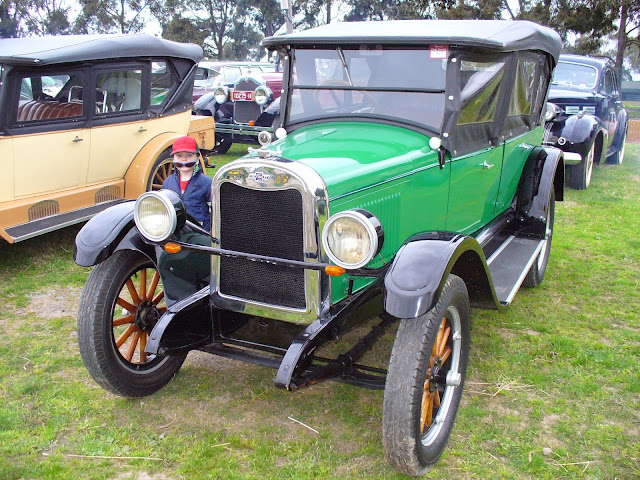 The original posting can be viewed at
http://my28chev.blogspot.com.au/2014/09/wooden-wheel-repair-for-chriss-1926.html

The biggest problem we encountered was some very poor quality work done by a previous owner that rendered one wheel borderline to keep or replace. Very pleased to say that Chris has progressed well and is now on the home stretch to having two rear wheels "as tight as a drum" and more importantly, safe.

The following pictures Chris sent today show wheels in a lot better condition than they were about 2 weeks back.

A previous repairer had chiseled a portion of the rear of the spokes where they fit onto the hub and driven a partial sleeve in-between. This had not worked and was potentially dangerous as the front half of the spokes were not supported on the hub.

We ran a hole saw through the center of the hub to ensure the hole was as even as possible, and Chris turned up a sleeve that would be a press fit into the spokes and the hub. 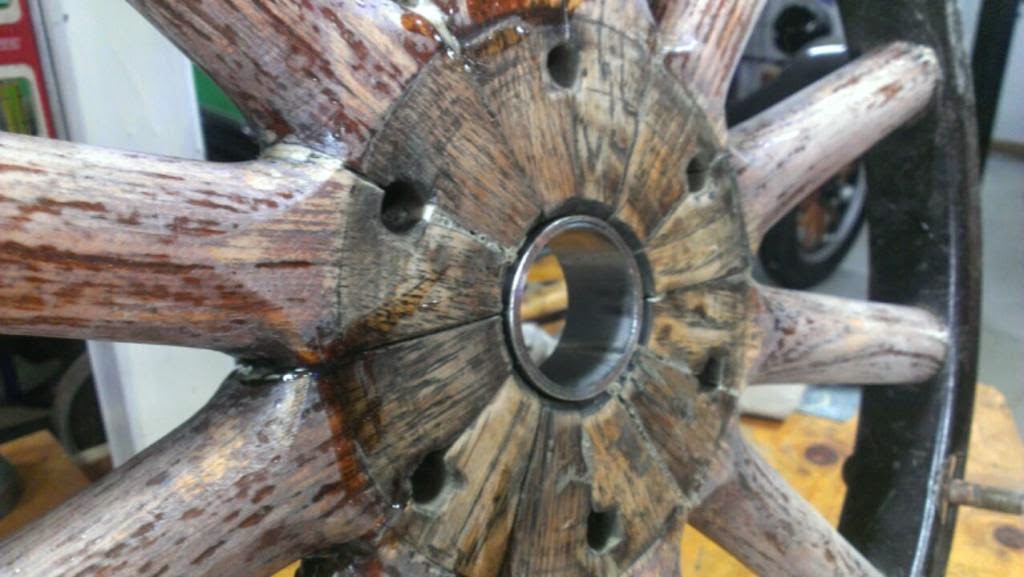 It may sound a funny statement but in this photo the wheel looks very tight, sanded and ready for repainting. 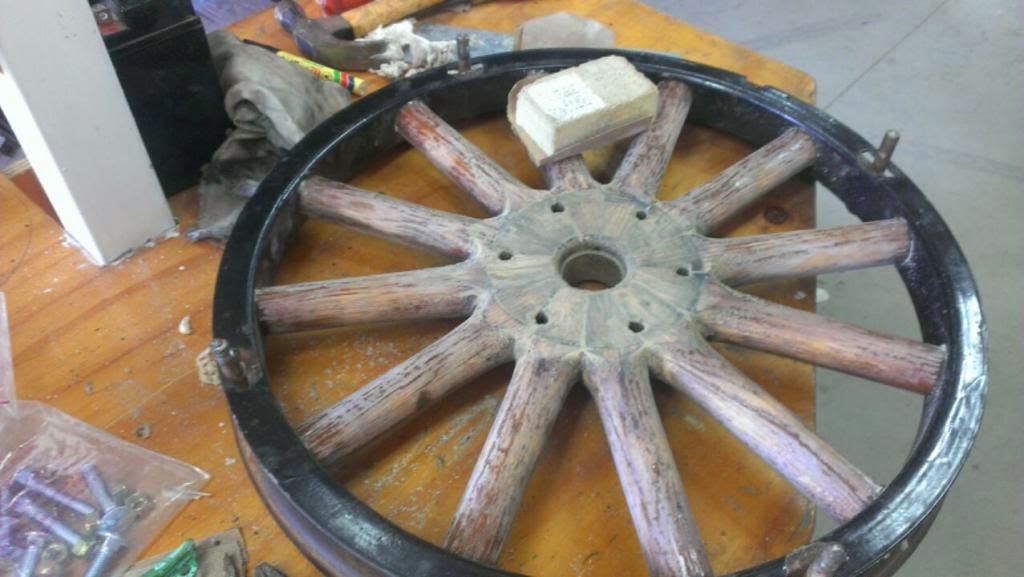 The following pictures shows the amount of shims (evenly placed) that were required to firm up the wheel. There is a shim between every spoke, and this was required by the spokes either being reproductions that have shrunk, or what I suspect being they were shaved previously to refit the wheel together. Prior to the wheel being stripped down, the center had twisted by shims not evenly placed. 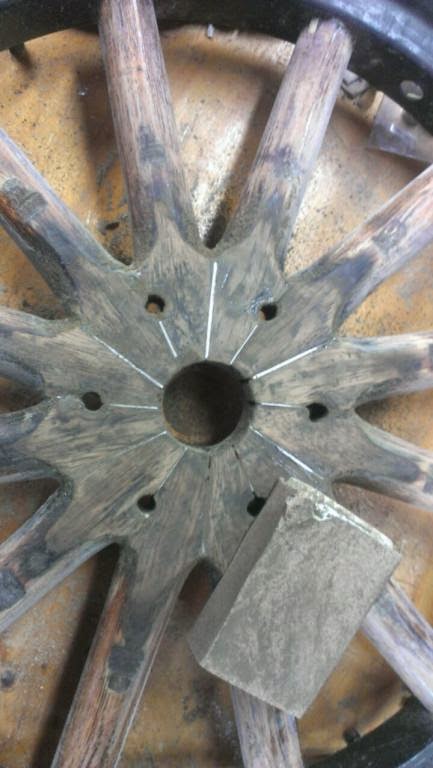 This is always the good part, repainting! 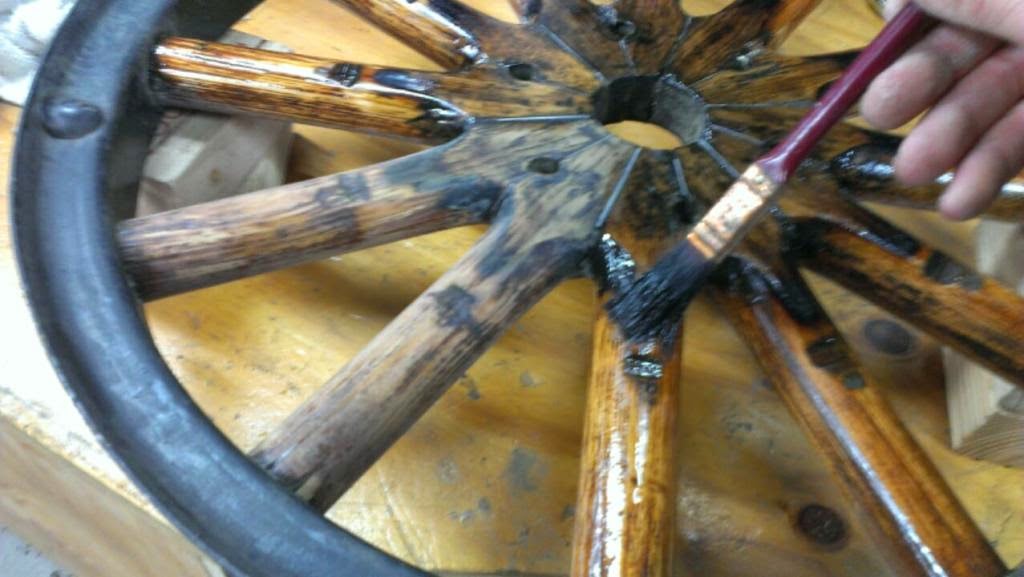 One wheel well on the way to being ready for action. More important, SAFE. 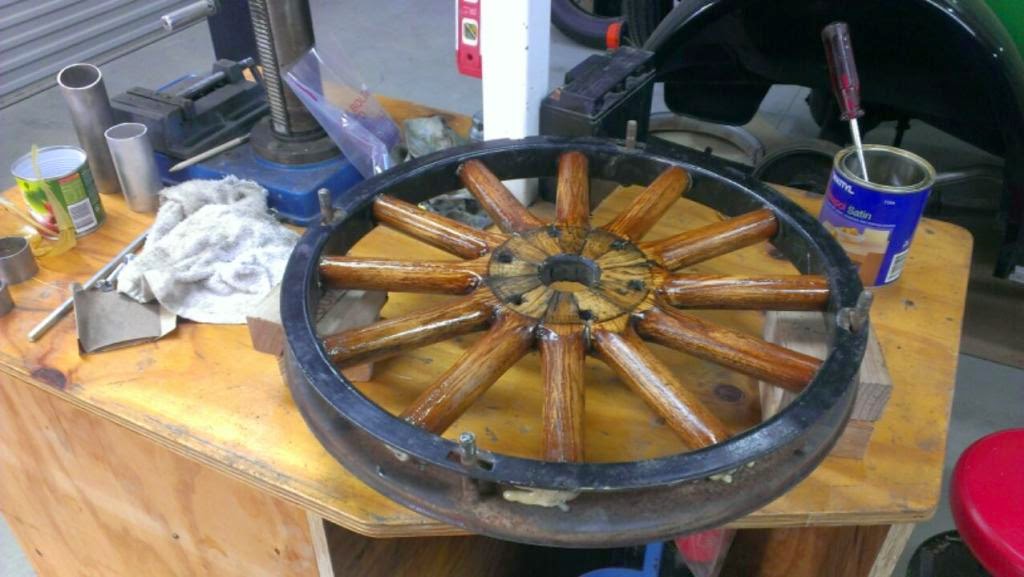 Moral of the story ...... If you choose to use Gorilla glue, use rubber gloves and don't get it on your hands. Chris and I discovered it takes a week to wear off, there is no way to get it of your skin.

I called by Chris's place today, very impressed with developments. The wooden spokes now have a great metallic sound when hit with a hammer, and they even look tight.

Chris has put a lot of work into the repair and I am sure that he could pass on the process to another person.......... that's a key point.

The latest pictures are as follows: 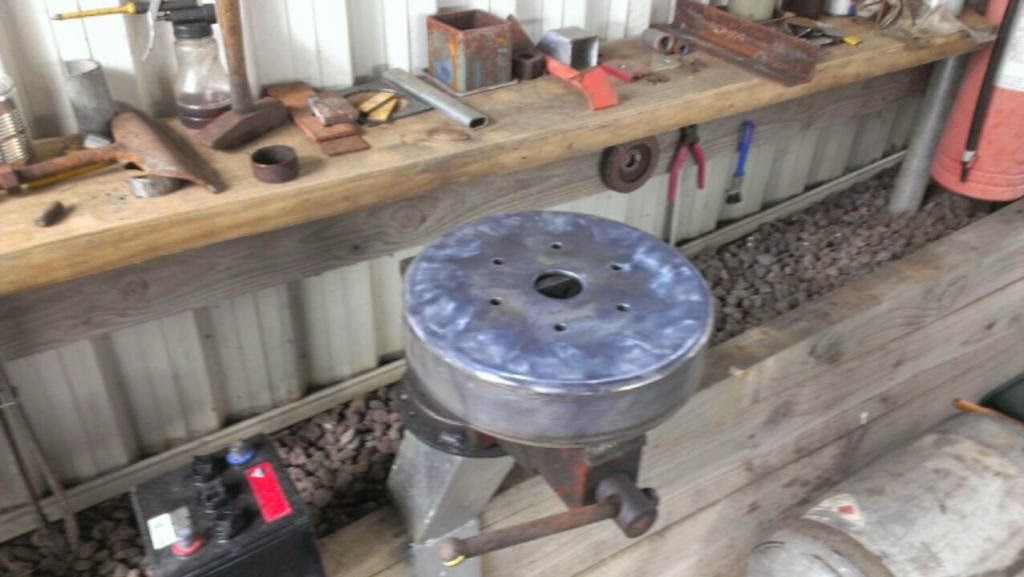 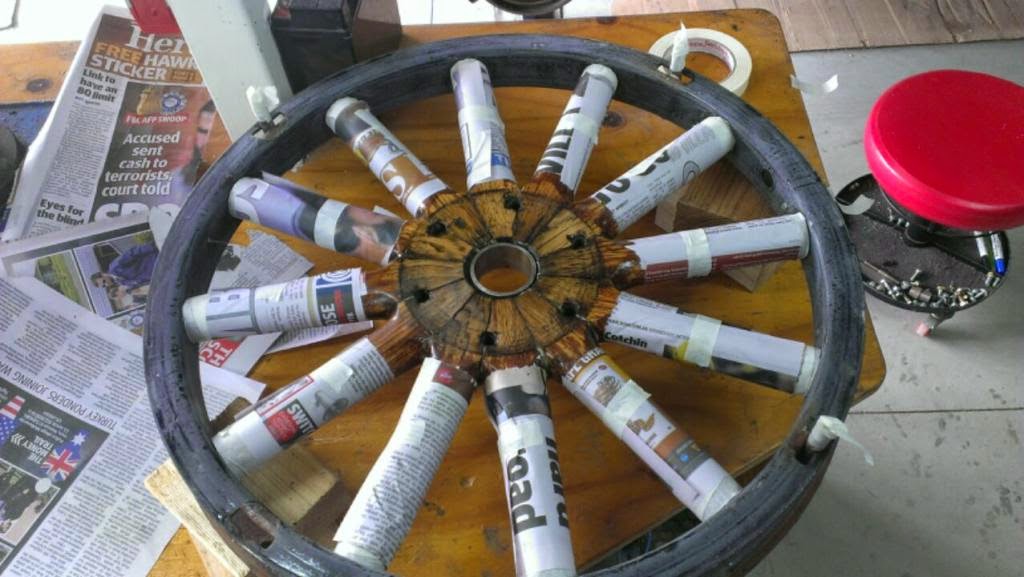 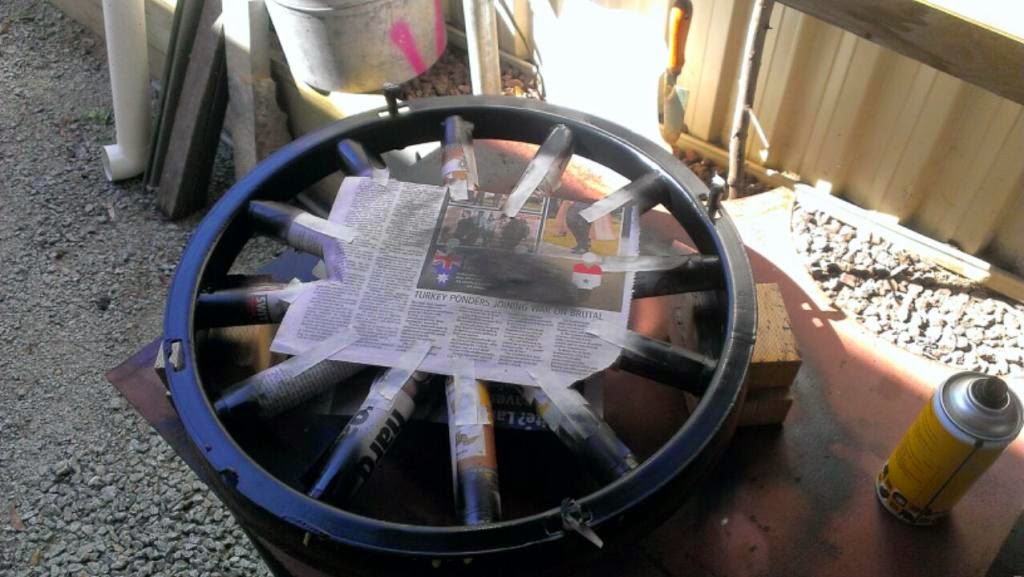 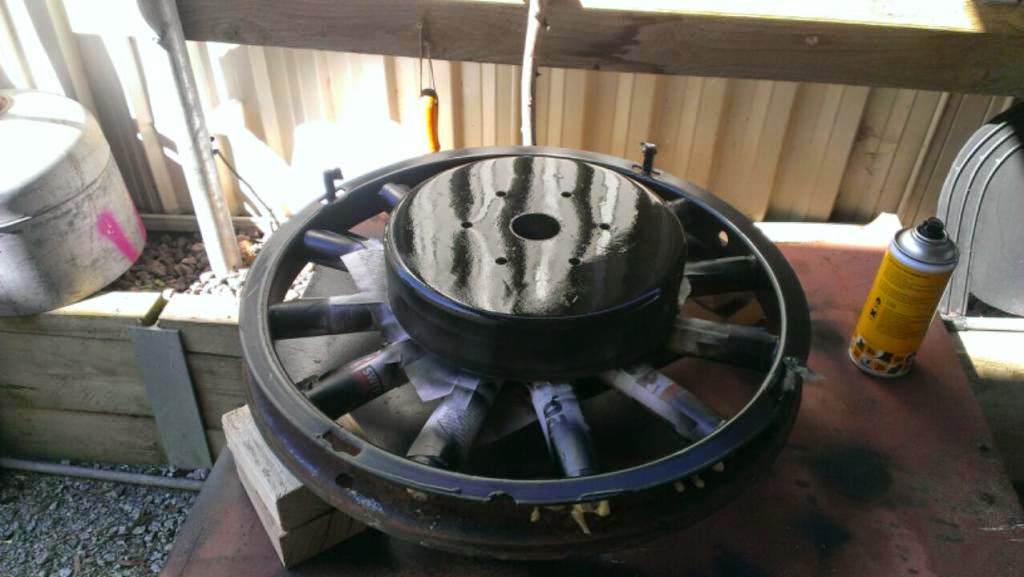 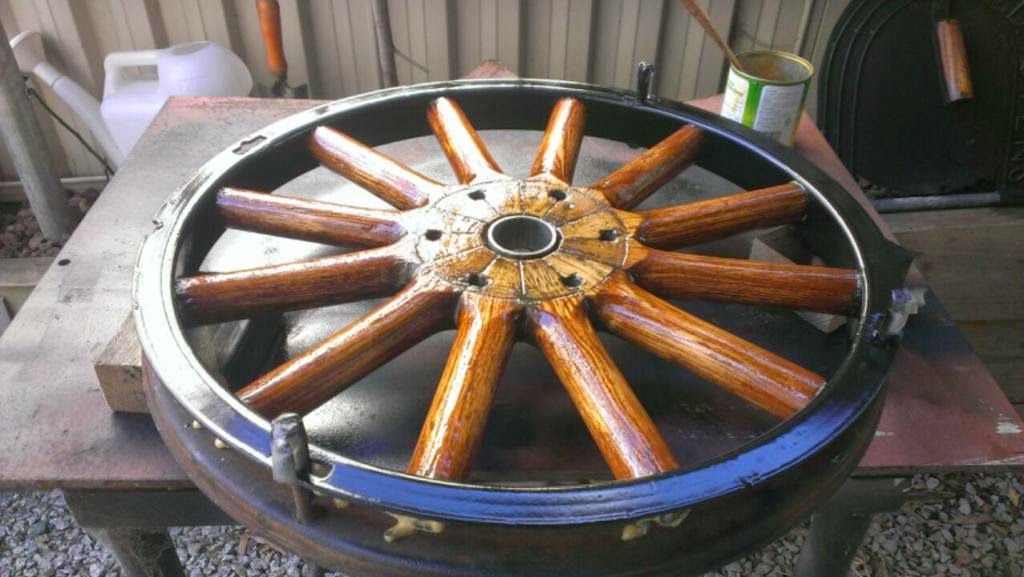 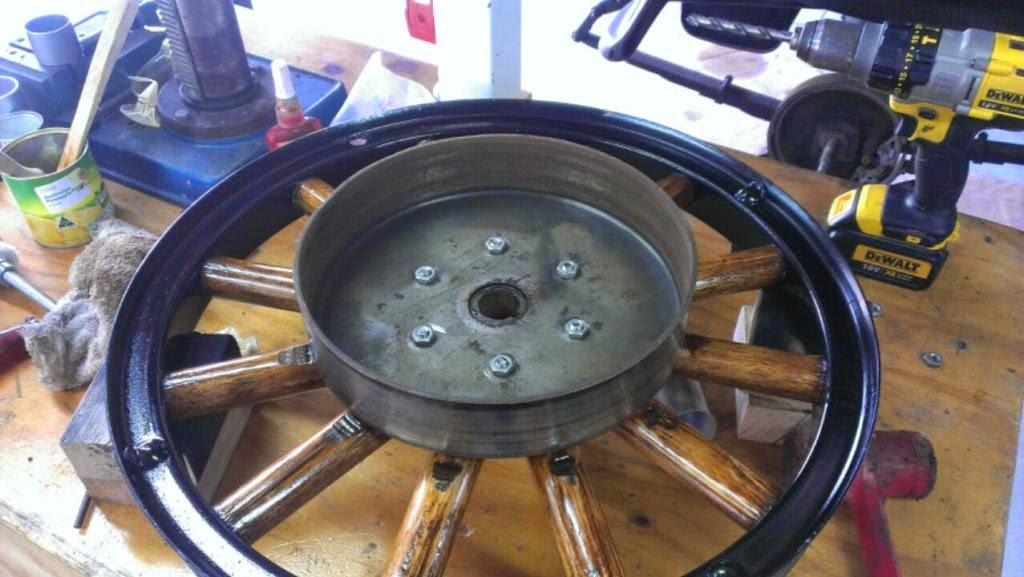 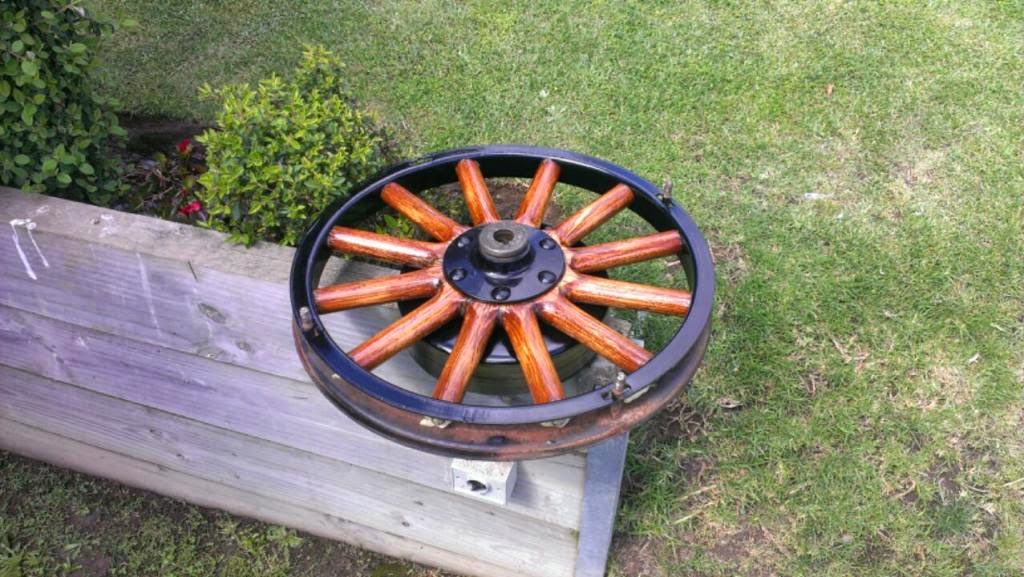 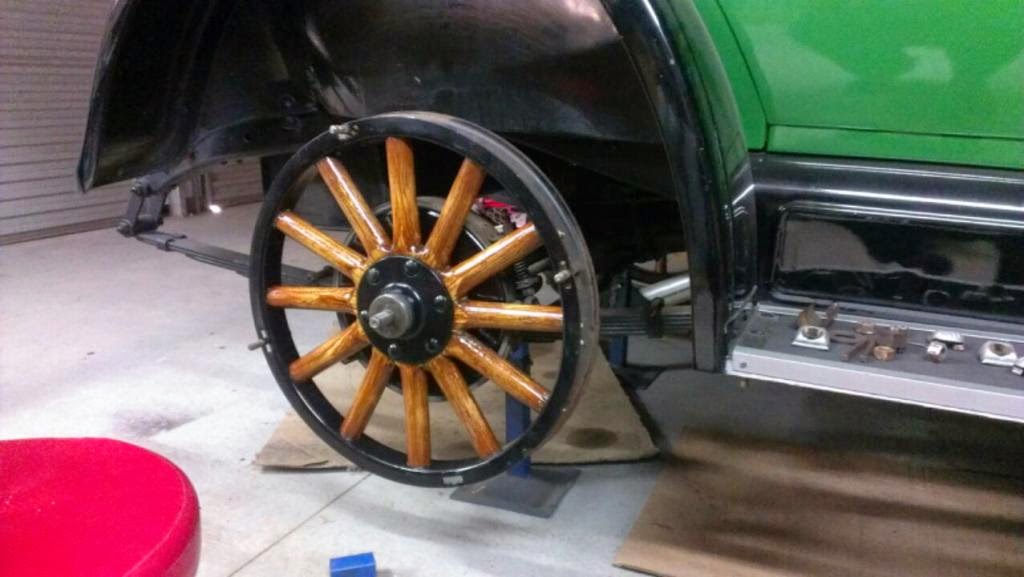