I decided to fit a thermostat, for the first time in 35 years to see what if any difference would be as postings on the USA Chev sites indicated the engine would run better with one fitted.

I checked my spare housings. The first was too corroded to use, two were usable and one required thread repair to be usable. I discounted the housing that was on my engine was I assumed the threads would be full of rust, broken bolts etc, and the plan was to do a quick swap over.

Over the last two weeks I derusted three housings and surface ground the gasket faces. One housing was put to one side as the threads were stripped, which left me 2 to choose from. The first one had good threads but a corroded radiator hose inlet. The other unit had fair threads and a good radiator hose inlet.

I attempted to fit a thermostat in the housing with fair threads, and you guessed it. The last bolt. The last 1/8 of a turn and it stripped the thread.Tried the second housing and it went fine. I was concerned with the corrosion on the radiator hose inlet, but pushed on regardless. All systems ready to fit in the morning.

Removed the existing housing, and was surprised to see the inside the least corroded of the lot. I then ran a tap through the threads and they were excellent. So after spending 2 weeks preparing housings to do a swap over, I ended up using the housing that was on the engine.

What can you say?

All is well that ends well. I have several spare housings that with minor work are serviceable.

With the thermostat fitted, the Chev now warms up quicker and seems to hold a more consistent temperature.

In the picture below, its not hard to see the one that has not been rust treated. 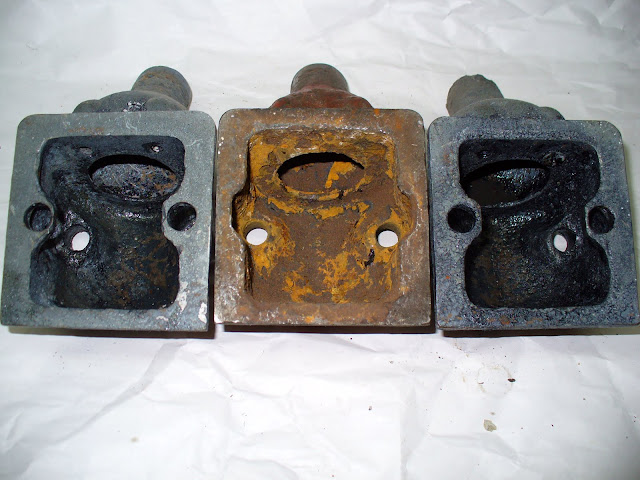